Two local businesses that have been around for nearly a century are coming together to offer another option for people working on their “after lumberyard hours” DYI projects. Vortanz Lumber is partnering with Northern Lakes Do it Best Hardware to provide lumber and other building products.

Vortanz Lumber is in its 91st year of business as a lumberyard, but the company has had its sawmill, one of only two mills left in Sawyer County, for 102 years. Started by William Vortanz Sr., the family-owned lumberyard “produced[s] timbers, beams, mantles, paneling and dimensional lumber,” said manager Gordon Abric. They have been operating since 1925, when William and Fred Vortanz started the mill and logging company, then named Seeley Lumber Co., on land from the S.J. Uhrenholdt estate across the road from their home in Seeley. They provided jobs and sustenance for local residents. Logging operations were discontinued in the 1950s, and the lumber company was separated in 1974 to become Vortanz Lumber. Owner William Vortanz Jr. has been involved in the operation since 1961. They purchase timber from local loggers, where it is sawed, dried, cut into boards and planed. They carry dimensional lumber, V-groove paneling, siding, interior finish lumber, beams and rough-sawn lumber, along with a supply of other manufactured building products.

Vortanz Lumber also has an in-house draftsman for building plans and can refer customers to contractors who don’t currently have one they are working with. Vortanz representatives are also available to field measure and verify dimensions for doors, windows and kitchens.

Northern Lakes Cooperative was formed in 1932 by a group of farmers who wanted to bring in lower fuel prices. By the late 1950s, they had expanded from fuel outlets, a grain elevator and farm supplies to a gas station, feed mill, groceries, a restaurant and credit union. Now, they also have a computer store, auto repair center and Do it Best Hardware. Do it Best Corporation proudly serves 3,800 member-owned locations throughout the U.S. and 54 countries.

The hardware store offers a wide variety of products, including power tools, major appliances, hardware, electrical and plumbing supplies and lawn and garden. They have an award-winning paint center with a color match system accompanied by one of the largest paint selections in the area. As a cooperative, Rewards Card member, patrons receive one percent cash back (at the end of the fiscal year) on qualifying purchases and access to periodic sale pricing when they use their card at the store.

Now, Do it Best will be offering lumber and assorted building products.

Do it Best Hardware manager Pete Mayou said they wanted to offer lumber in addition to their other hardware supplies. He approached Steve Vortanz, William Sr.’s grandson, about a partnership between the two companies.

“This opened a door for us,” Vortanz said. “We wanted to have a presence in Hayward.”

Mayou said, “Through Vortanz, Do It Best will offer an assortment of basic building products, ranging from dimension lumber to sheathing, insulation to drywall. This is a starting point, and as business grows, they’ll adjust and expand product offerings according to customer needs.”

Vortanz said, “2X4s and 2X10s are usually the most popular dimension for lumber.”

Vortanz will replenish supplies on a weekly basis.

Another plus of selling lumber through Do it Best is their hours are open later than most lumber yards, allowing the weekend warriors access to building products locally when most lumberyards have closed.

For customers requiring further assistance with measurements and consulting Vortanz can be contacted directly at (715) 634-2567. Larger orders requiring delivery will be coordinated with Vortanz Lumber for jobsite delivery. 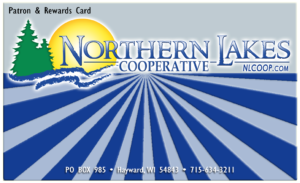 Ship where you Shop!